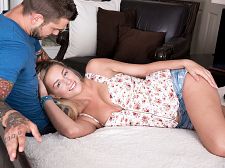 Sophia is a naughty girl. She sneaks her boyfriend in her room and she fucks him while her parents are in the other room. She tries to not make too much noise as she chokes down his cock, but she still lets out gurgling and gasping noises.

They get into a 69 and Sophia’s guy spreads her pussy lips wide open to expose her pink teen tunnel. Her hole looks so small, but it can stretch to take her boyfriend’s big cock. He fingers her and licks her clit, spreading her open yet again to show off her mini gaper. Sophia is now ready to get fucked.

Sophia gets treated to the long stroke, and we get treated to more views of her pink lil’ gaper. And for the grand finale, she gets pounded in the pile driver position, then comes back up to get one of the biggest facials we’ve ever seen.

Other Sites Of Interest

Check out the Penthouse Pets Of The Month and Year.

See all the Women Of Penthouse.